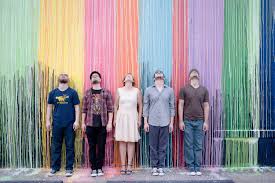 The Wheel Workers is a Houston-based five-piece recently nominated as Houston’s “Best Pop Act” in 2014’s Houston Press Music Awards. The band also received a nomination for Steven Higginbotham, the group’s lyricist, as “Best Songwriter” – an especially noteworthy accomplishment for a pop band.

“I love artists who’ve had something substantial to say beyond the standard lyrical fare in pop songs,” Higginbotham says.  The Houston Chronicle called The Wheel Workers’ previous release “one of the best albums made in Houston last year,” and now the band will follow it up with a new record CITIZENS, scheduled for release on May 26th , 2015.

When Higginbotham talks about substance in pop songs, he’s talking about the pairing of sociopolitical consciousness with a memorable hook. After all, there’s a reason that listeners are still moved by the catchiest folk and punk protest songs of Woody Guthrie, Bob Dylan, and The Clash.

This approach to music-making by The Wheel Workers is the reason why the Houston Chronicle went on in that same piece to call the album a “thoughtful recording that offers new rewards during repeated playings.”  On CITIZENS, the band’s way of doing things has become masterful, with the album’s opener “Yodel” providing a vibrant example of the pairing of hook and substance.

Learn more about The Wheel Workers and the upcoming CITIZENS album via this album preview video!