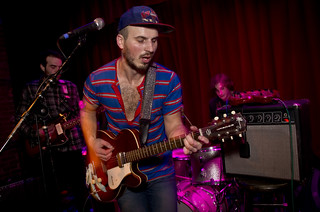 Another new artist that is so amazing.  Martinson is so great.  Remember when you were a kid, and your neighbor had the greatest collection of 45’s, and you promised yourself you were going to make the greatest 60’s single ever?  Well, Craig Martinson beat you to it.  “Monster Man” is such a great song.  Originally from Boston, Martinson moved to NYC to share his vision of the 60’s turned upside down.  He has certainly succeeded.  I cannot wait for the EP.  Imagine Bobby Sherman fronting the Tame Impala or Sky Saxon sobered up.  This is really unbelievable.  Listen to this.

AudioFuzz sat down and talked with Craig about his music and his career.  His answers are as great as his music.

1.  How long have you been playing?  When did you start?  Did you lip sync to your hairbrush in your bedroom?

I started performing for my family at age 3. My favorite songs to sing were “Heard It Through the Grapevine” (Creedence rendition), and “Rudolph the Red-Nosed Reindeer” (year round). At age 5 I became obsessed with “Back To the Future”. I made my dad watch it with me every day for an entire year. That is not an exaggeration. I’d pretend to be Marty McFly performing Johnny B. Goode at the Enchantment Under the Sea Dance in my kitchen. I had a small red chair that I imagined was my amp (though I didn’t know what an amp was at the time) and I’d kick it over and start flailing on my back on the floor. That was when I fell in love with rock n’ roll.

2.  Who were your mentors growing up?  Did you have a huge record collection?

Aside from Marty McFly? My father and uncle were both musicians. They played drums and bass respectively in a killer band during the late 70s called The Buzzarians (think The Ramones meets Elvis Costello). When I was 10 they rented a bunch of studio gear and recorded an instrumental surf rock album in my dad’s house and released it as The Martinson Bros. It kind of blew my mind. My uncle composed all the tunes and played lead, but my old man handled the arrangements and played drums, bass, keys and rhythm guitar. I take after my dad in that respect. I can get by on almost any instrument, but I’m not going to blow you away… Growing up, I pretty much just listened to The Beatles and The Beach Boys on repeat. Also my dad’s influence. My mom threw in some cool records: Squeeze, B-52s, Jesus Christ Superstar – that was a big one actually. At 19 I wrote, produced and directed a rock opera called Zantalamus with my favorite collaborator/co conspirator Mark Brickman. We still play and write together in a project with my lady love called Def.GRLS! We’re about to drop our debut EP!  Wait what was the question? Sorry…

My super fav bands making records today are Tame Impala, Unknown Mortal Orchestra, The Dirty Projectors, and Foxygen, but Kanye West is my spirit animal. I LOVE all his records and I’m completely infatuated with him. I dig everything he does. He is the most entertaining man on the planet and a great fucking artist. I know a lot of people will disagree with me…violently perhaps …but that kind of proves my point.

4.  Do you always dress colorfully?  You are one of the most interesting guy I’ve heard for a while.  Tell us more about yourself.  What was growing up in Boston like?  When did you move to New York and why?

I refused to dress as anything other than a superhero, ghostbuster or ninja turtle until I hit gradeschool. Then I transitioned into technicolor umbros and no fear t-shirts. I’ve always loved vibrant colors and patterns. Neon pink is the best. Obvi. Boston is a cool town. My youth was spent romping around the beaches of the south shore. I went to high school north of the city in the suburban town of Andover, birthplace of indie punk heroes Piebald, actor Michael Chiklis, and late night legend Jay Leno! TRIVIA!!! I moved to NYC 2 years ago. I had given up writing and had been sitting on a record I recorded over the previous half decade. Some close friends whipped me into shape

and before I knew it, I was back on stage and the record was out. It’s called Heartbeat. I’m proud of it. Brooklyn has been a breathe of fresh air. Well, not literally. This place is god damned filthy. BUT I LOVE IT.

5.  Do you prefer to perform live or work in the studio?

I’m a studio rat. I could play with my 4 Track Cassette Recorder and Space Echo all day. I understand why people get off on a great live show, but a great record is truly timeless. ABBEY ROAD.

6.  Anything you want to reveal to us you have not yet?  What type of wild animal would you be?

I’m kind of a jock, a bit of basketball nut. DIE HARD CELTICS FAN. I competed on the Nickelodeon show GUTS and I have a piece of the AGGRO CRAG. To the victor go the spoils. I’d be a Walrus. Have you seen Tusk? Kirk out.