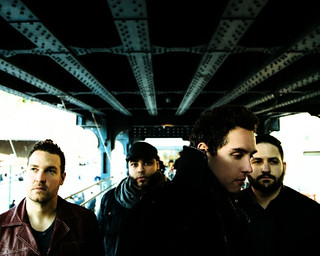 From the sewers of NYC comes Ghosts of Eden.  Audiofuzz sat down with them and had a great conversation.  This is the result.

1.  How long have you guys and when did you get together?

-So Rich and I technically started the band in 2007 but after fooling around and not taking ourselves too seriously for 2 years, we REALLY got things going in January 2009 so I guess we’ve been a band for 6-8 years.
2.  Who are some of your main influences?
-When we first started our main influences were the big 4 grunge bands: Pearl Jam, Alice in Chains, Soundgarden and Nirvana. Rich and I also really liked Third Eye Blind, Foo Fighters and Smashing Pumpkins. It’s really evolved though. I love punk and 80s new wave. Ben likes prog metal. Rich likes hardcore. Miles loves thrash metal and blues. We bring a lot of different influences to the table.
3.  In a review, I mentioned that your music is like a sucker punch to the solar plexus.  Do you believe that is true?  That is meant as a complement, much like Lou Reed, when he heard the Ramones, said “This band is dangerous”.
-I’m not even sure what a solar plexus is but that sounds painful. I can assume what they meant though. I mean, I can’t say that’s true without sounding a bit arrogant so what I will say is that it’s flattering to hear. I think we put on a great live show, and I think we try to ensure our music can really get people moving, or at least out of their seat.
4. Do you believe you represent NYC?  I do.  Patti Smith NY scene is dead.  Do you agree?
-It’s funny you ask this. Things really have changed. I don’t think that Patti Smith scene is really around anymore because that wasn’t even a scene. That just WAS NYC music. Nobody was trying to do something specific. Now you have the hipsters, the metal heads, the singer-songwriters. I wasn’t around for Patti Smith’s beginnings but I’m a native NYC’er and while there are glimpses of originality and genuine talent and genuine New York grit, I sometimes wonder whether or not some artists are really just trying to hard to be “something” instead of whoever they truly are. We’re not trying to reinvent the wheel so we don’t. We’re just normal dudes. That’s probably why we will never get signed, haha.
5.  I love your music.  I think it’s exactly what the music scene needs.  Do you write from actual experience?  Where do you get your ideas?
-Thanks man. I do appreciate that because we feel like it needs us to! Everything has at least some experience in there. I know when I write songs for GOE, I try to be a little bit more mysterious but this latest record of ours is a bit more straight forward and I am so proud of these songs. The ideas usually just come from something near and dear to me. I grew up Catholic, going to a religious school from the time I was 5 until 18 so our new song “Doubting Thomas” is a reference to Thomas in the bible. He doubted that Jesus was who he said he was until he had proof. This song for me is about my questioning of the after life. My faith started waning after my grandmother passed away 12 years ago. This song is sort of like my letter to God, asking if there is still a place in heaven for me even if I’ve doubted its existence. Sounds kind of deep when I read it back, but I swear I’m not that weird, haha.
6.  It seems to me that you love playing live the best.  Is that true?  Do you like the studio?  Or do you need that rush from the crowd?
We love playing live, but I think the older I get the more I enjoy being in the studio where I can really “create.” I love seeing a song come to life and absorb its true personality through sounds and different instruments and amps and tones. It makes the hair on your arms stand up when you really hear a song  come alive for the first time. It’s like playing Dr. Frankenstein!
7.  Listening to anyone new these days?
I’ve always love TV on the Radio. They have a pretty sick new album, but some new bands I’m obsessed with are all from the UK:  Darlia, Wolf Alice and Catfish and the Bottlemen. Check them all out. They wail.
8.  When are you touring Pittsburgh?  I need kick ass rock.
I wish bro! We’d love to come out there. No tour scheduled yet though unfortunately. If you book us, we will come.
9.  Anything you want to say I didn’t ask?
I’d just like to thank you for taking the time to introduce us to your fans and readers. It’s hard taking a chance on a band that hasn’t sold a million records, so thanks for the kind words.