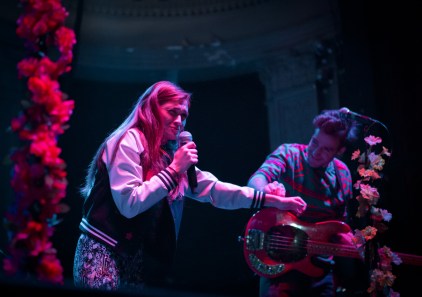 On Tuesday, April 7th Misterwives performed to a sold-out crowd at Broeoklyn’s Music Hall of Williamsburg. Openers included newcomers Handsome Ghost and the jazz meets R&B meets electronica duo Marian Hill. The show was nothing short of amazing and the energy that ensued spread like a contagion.

Both bands jump-started the night with exciting sets featuring each artists unique compositions. Hill’s Samantha Gongol impressed us with angelic vocals competing with a bass/trumpet player and an enigmatic keyboardist that really invigorated the crowd. The impressive trio really infused the electricity throughout the venue preparing us for the headliners, misterwives.

Misterwives opened their impressive set with the title track from their debut album, Our Own House. Mandy Lee’s vocals immediately soared through the crowd as they opened the title track slow and lead into the version we are familiar with sparking an immediate dance hall. The band interacted with the crowd thoughout the night exchanging glances and motivating us to jump. The set included most of the songs from their debut album and there wasn’t a dull moment. Misterwvies is one of the most promising and enigmatic acts out right now. We highly suggest you see them on tour.