On the song’s lyrics Yannis says: “Some of that is to do with my grandmother, and to do with aging, and being on the verge of passing over into something else, and having remorse and guilt.” Catholic guilt? “Byzantine guilt… bloodlines, and disappointment, and the unwinding of genes.”

Foals will be performing live at Coachella before kicking off a two-month North American headline tour. Visit www.foals.co.uk for dates and more info. 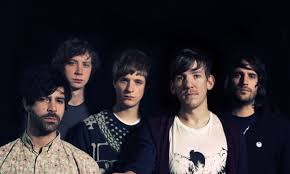