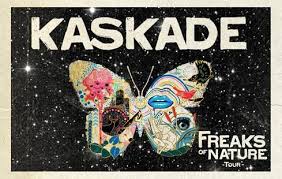 Kaskade, the trailblazing artist who earned the distinction of being the first DJ to ever play Los Angeles’ STAPLES Center during his Freaks of Nature summer tour last year, will release his performance of the milestone, sold-out show on his forthcoming Freaks of Nature Tour DVD on Tuesday, May 14 on Ultra Music, it was announced today. In advance of the May 14 release, fans can pre-order the DVD on Amazon at http://amzn.to/Yvazbf, with a digital version available for iTunes pre-order on April 30.

“There was absolutely nothing like that Freaks of Nature tour last summer,” said Kaskade. “This was the biggest tour of my career and it was, by far, more massive than anything I ever could have imagined.  Selling out Staples Center was just a dream come true and the electricity in the arena that night was unspeakable. I’m so excited that we captured it for this DVD and hope fans can get a glimpse into that incredible night.

The DVD from the July 27, 2012 STAPLES Center appearance features over 40 tracks with some of Kaskade’s best mashups and biggest hits including his opener “Eyes,” “Stars Troll,” “Angel On My Shoulder/Stronger,” “Lessons In Love” and the closing performance of Kaskade’s mashup of “Call Out” and “Epic.” The film also captures behind-the-scenes moments and his performance at the Bill Graham Civic Auditorium show in San Francisco, along with 40 other stops on the tour.

Kaskade marked an industry milestone by selling out Los Angeles’ STAPLES Center after already earning the distinction of the first Electronic Dance Artist to ever solo-headline the venue during the biggest North American tour of his career last year, the Freaks of Nature Tour, presented by Rockstar, which reached more than 40 cities and sold out a number of other stops along the tour. After multiple attempts to play the Los Angeles area over past years, the Staples show marked Kaskade’s first proper show for the passionate Los Angeles fan base since his two back-to-back sold out shows at the Palladium in 2010. For the tour, Kaskade produced a brand new stage set up that created an electric atmosphere at venues of all sizes and brought it to everything from ballrooms to theatres, arenas and festivals.