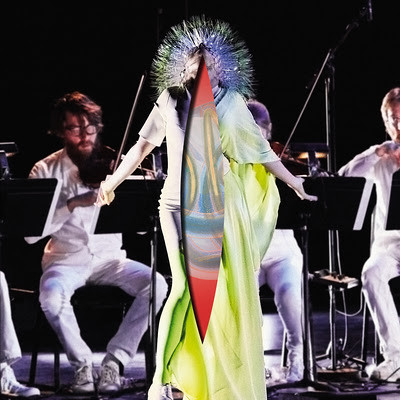 It was just a matter of time before our favorite Icelandic elf would record an album with all strings.  She has led us down so many weird and interesting and terribly wonderful paths, that a string orchestra makes sense.  The orchestra NEVER overpowers her most important instrument; her voice.  As Bjork herself states:

“while i was working on Vulnicura , it became one of the most magical thing both musically and spiritually to unite the electronics and the acoustic instruments in an almost romantic way : to prove they can coexist !! that positive tango was a proactive counterpoint to the lyrics of the album : the end of an union . onion . tears . a lot . lol .

but while working on it i felt somehow for the first time , this was an album that could take another version : a reveal , to simply have the acoustics stand on their own for the folks who wanna indulge even further into the wooden timeless side of this music . w / no techno .

so here it is : i dug out the more close up pick up miked versions , other sonic point-of-views , added some violin solos by the gorgeous Una Sveinbjarnardóttir and the talented Sławomir Zubrzycki played masterfully the viola organista ( an instrument invented by Leonardo da Vinci but only recently built for the first time . it is little but like a grand piano which is bowed not plucked )

All these odd, and they are odd, musical choices really enhance the beauty of Bjork’s voice and her compellingly strange lyrics.  I am looking forward to hearing and seeing this tour in person.  Bjork might be the most important and unique musical talent ever.