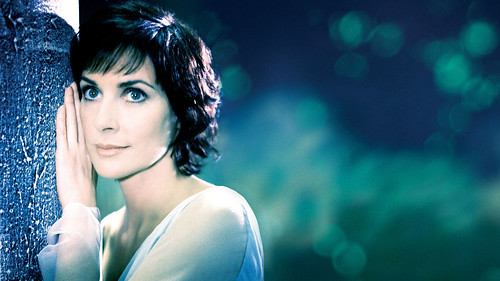 Enya is back, as beautiful and haunting as ever.  She still reminds me of the music Galadriel would sing in Lorien.  There is no doubt to me, she is not from the world.  Enya is other-worldly.  Enya, born Eithne Ní Bhraonáin; anglicized as Enya Brennan, born May 17, 1961, is an Irish singer, instrumentalist, and songwriter.  Everyone has heard an Enya song; but she is so impressive and so talented that she is often used as soundtrack music.  That’s because Enya paints with her music.  And her new album, Dark Sky Island, is no exception.  Don’t get me wrong; Enya never repeats herself.  She is always creating new, beautiful music, like Eno or Bjork.  This new album has all the sweeping grandeur of her previous music.  Thank you, Enya.  The world would be so limited without you.  You make me realize elves, dwarfs, and other creatures still exist.