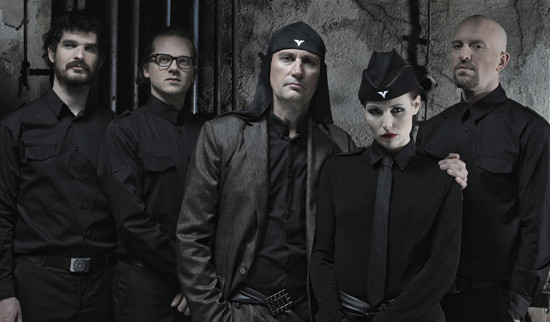 Laibach has released their new CD of remixes.  I love Laibach.  They are one of the most complex and misunderstood bands of all time.  So many times, they have reflected the terrible ups and downs of Eastern European regimes from Germany to the communist regimes to the post Yugoslavian genocides.  Often people would save that Laibach were fascists, communists, socialists, anarchists.  I believe that Laibach always reflected the times and situations around them to draw attention to the injustices they saw.  They speak for THE PEOPLE, whoever and wherever they are.  Now they are on tour with their remixes and their messages.  Included in the European tour dates is a performance at Munich’s Residenztheater on April 11th, part of their collaboration with the award winning Swiss director Milo Rau for his latest production, The Dark Ages.The Dark Ages is the second part of Rau’s Europa trilogy, focusing on the dark history of a Europe in the process of unifying. Actors from Bosnia, Germany, Russia and Serbia tell their stories of displacement and homelessness, of departure and arrival, of dedication and despair.  They are coming to a town near you.  Definitely go see them.

SPECTRE DIGITAL DELUXE TRACKLISTING
The Whistleblowers
No History
Eat Liver!
Americana
We Are Millions And Millions Are One
Eurovision
Walk With Me
Bossanova
Resistance Is Futile
Koran