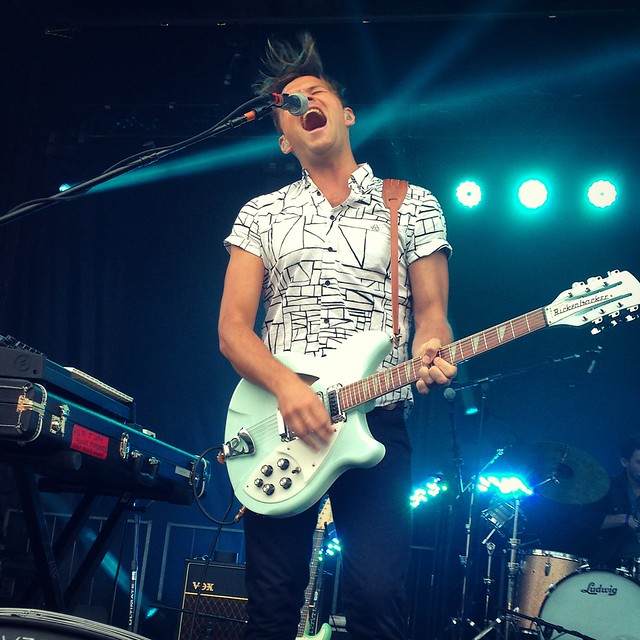 I was lucky enough to attend a special event sponsored by Rocket Fuel at Pier 84 in New York City with one of the hottest indie bands of the year, St. Lucia. While this specific line up of the band has only been together a short while, Jean, the lead singer, and his wife and bandmate Patti gave me some awesome insight as to what the band is looking to accomplish this year and their hopes for reaching new ears throughout the rest of their summer tour.

The music of St. Lucia drips with a sound that a lot of new adults are familiar with from their own childhoods. An upbeat synth-pop tone with soft yet transforming vocals that Jean has mastered quite well.

“I’ve always enjoyed and admired artists like Lionel Richie and Hall and Oates. It was music that was so simple but made people dance and had a nice groove to it. That’s what I wanted my music to sound like.”

Hailing from South Africa and ending up in Brooklyn (where he and Patti met) Jean was exposed to a wide array of musical influence which laid the foundation for his retro musical prowess.

Patti explained “Jean really is the backbone of St. Lucia. There would be no band if weren’t for him. He is able to make these melodies that he will play for us and we all get to add our own little something to make the music what it is on our record. He has such an awesome taste of influences and I think a large part of the success comes from the fact that people recognize and are attracted to the sound that he’s made.”

The crowd at the Rocket Fuel event was anything but tame come showtime. The band played a great mix of songs from their current album “When The Night” and got the audience involved in singing as loud and as much as they could. Each member of St. Lucia has an energy that you can see from any standpoint which makes their live shows such an awesome experience. I asked the band what they hope for in the rest of the year and if a musical guest spot on Saturday Night Live was on their radar.

“I would love to have that kind of platform to show our music to the world,” Jean replied “That show gives such positive exposure to great musicians and I hope we could get to be one of them.” St. Lucia drummer Dustin Kaufman added “While I haven’t been with the band from birth I’ve been lucky enough to play with them on this tour and I can tell Jean is a force of nature. He gives us such great material and being able to perform it live and make it sound as good as a record is tough but Im glad we pull it off. I think showing off this energy on a show like SNL would be major for us.”

When I spoke to the band about what their music means to them and what makes it different from the electronic music that a lot of people are listening to today Jean was quick to respond with “I love critics. Critics help me think of what I know I’m doing right and what I may possibly be doing wrong. Our music comes from a place of inspiration and artistry. A lot of music today, whether Electronic or Indie or especially Top 40 has no depth and is forgotten about in a couple months. I want our music to get the recognition it deserves from the people who understand and enjoy it.”

Its no surprise that St. Lucia has the confidence of a band that’s been together for decades. They have a strong connection to one another and make well rounded music that not only they can enjoy, but that the world can experience and remember for longer than just a few months. They are definitely a band that is aimed for success and we will be seeing a lot more of them this year.
St. Lucia is continuing their tour throughout summer and is hoping to make new sounds together come the new year. For tour dates, bios and all other info check out their website at stlucianewyork.com