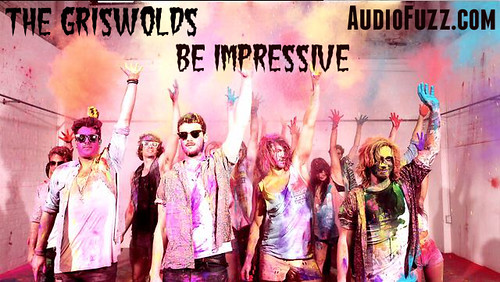 It is easy to see why the Australian-based four-piece band The Griswolds has garnered the attention of a several hundred bloggers worldwide with their infectious indie rock and party pop infusion. They often reference legends like the Beach Boys, Fleetwood Mac and Of Montreal in their work and that is palpable when listening to them. In 2012 they released their Heart of a Lion EP and after two years of anxiously waiting we finally got their full length album Be Impressive. No doubt this is what they were told when their career began and ears were wide open.

The album begins with an optimistic outlook on the feelings that coincide with growing up, falling in love and finding your path. “16 Years” and “Right on Track” are a testament to the boys current stance in life compared to where they used to be. While “Down and Out” is a synth heavy track with an incredibly infectious chorus that cautiously slides into more ballad driven verses that reference a “poison” that they aren’t very proud of.

The albums songs consistently carry a youthful vibe with a children often shouting the chorus and none is more prevalent than in the album’s title song “Be Impressive.” ‘We belong, we are young and we are free…’ sings Tim John in a confidently nostalgic way. Things slow down moderately with “Live This Nightmare” when the attention returns to a relationship gone awry and the hell that one goes through in these circumstances.

“America” is rather self-explanatory considering the groups success in America and the extensive travel they’ve done to support that. A heavy ballad with a violin accompaniment in “Thread the Needle” with the boys singing ‘Oh my god, to thread the needle into this old life..’. A slow and steady start for “Aurora Borealis” that gently moves into a Carribean-feeling track about….. you guessed it, LOVE!

The boys left off a few tracks from the EP but left on highlight “Beware the Dog” that is by far the most ambitious track and most fun. All-in-all, we can’t say enough good about this band. They are the epitome of fun, sunny, party, pop music with an edge.