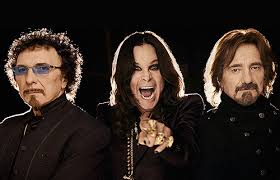 The godfathers and creators of heavy metal have returned with their first single “God Is Dead?” after a 35 year hiatus from recording new music. Tony Iommi brings a classic, traditional Black Sabbath riff to this song that has their signature gloom and doom sound. Iommi brings this song together with expeditious guitar playing that is on par with his earlier days. Geezer Butler’s bass playing is galloping and played similar to guitar playing. Butler keeps with the drums but isn’t afraid of using lots of notes and playing right alongside the guitar at times. Brad Wilk from Rage Against the Machine is featured on drums in place of Bill Ward. Despite the unfortunate fact that Ward is gone Wilk manages to fill in his place quite comfortably with some powerful and fleeting drumming. Ozzy Osbourne’s voice is back to that “War Pigs” style singing. Ozzy sounds better than he has in years on this record and proves his voice is still in tact with high and low parts.

Overall “God Is Dead?” is a fantastic first single that showcases the bands undeniable contribution to the genre of heavy metal and shows that these monsters of rock have only become better with age. We’re looking very forward to seeing what 13 will bring to the table.