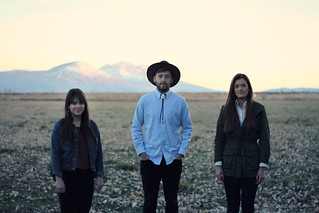 “As We Ran” is the follow-up to The National Parks’ debut album Young.  “As We Ran” was commissioned by The National Park Experience: A Film Series and was featured in the film, Love In The Tetons. After the release, the band decided to donate all revenue from the first month of single sales to the National Parks Conservation Association.

The trio are an Indie Folk band formed in Provo, Utah and are made up of Brady Parks (guitar, kick drum and vocals), Sydney MacFarlane (contributing vocals, keyboard, tambourine and glockenspiel) and Bae Sorenson (violin and vocal harmonies).

All I can say, I love this band.  Listen to The National Park, and you will want to go visit every national park out there.  Even I, Mr. Stay At Home, want to visit the Tetons, listen to this song, dance around with the birds and animals, and clap my hands.  What a fun band.